Kuwait: Al-Sager: “Being at the helm of leading NBK demands that we set the pathway to pioneering and be a role model in the banking sector

Mr. Isam Al-Sager, Group CEO at the National Bank of Kuwait (NBK) received “Distinguished Services to Arab Banking” award from The Arab Bankers Association (ABA) in London for his outstanding efforts and lasting contribution in the banking field. The honoring ceremony took place at the ABA Annual Gala Dinner held in London.

“This is a truly special day on both the personal and professional level. It is such an honor to be recognized by such a leading esteemed organization like Arab Bankers Association with its long history in developing the banking industry in the Arab world.” Al-Sager said.

Al-Sager highlighted that the experience of leading a distinguished leading organization like NBK poses various and unique challenges that leads you to pioneer and be a role model in the banking sector on how to continue to grow despite the challenging operational environment surrounded by fast paced technological development and continuous changes in customer needs, in addition to pursuing the consolidation of the bank’s leadership position. Being successful on the financial and operational front is very important but we also have to pursue sustainable economic development and be socially responsible.

“Since I assumed my responsibilities as NBK Group CEO in 2014, we successfully managed to further strengthen the Bank's leadership in the Kuwaiti banking sector, continued to implement our diversification strategy and expanded our international operations. Those efforts went hand in hand with the implementation of our digital transformation strategy which is a main pillar to further maintain our development and fulfill our commitment as a bank of the future through keeping up with all the new technological developments and satisfying our customers’ ever evolving needs”. Al-Sager added.

Al-Sager said: “Being a part of the banking sector requires participants to continuously learn and develop, in addition to the ability to be a good team player. These are the core values that truly boost success across all financial institutions, especially banks. It is necessary to believe that the real role of banks is not limited to satisfying financing needs, but rater extends to make a difference in people’s lives, drive institutional growth and develop communities that were the banking model that NBK was built upon.

“Throughout my professional career in the banking sector for many decades, I am still as enthusiastic as that first day when I decided to join NBK and taking on the mission to maintain the Group’s successful journey. I also have the same passion when I talk about NBK’s strategy and goals as when I used to listen to my father talking about banks’ strategic role in financing developmental plans and fulfilling the financial needs of both businesses and individuals.” Al-Sager concluded.

During his introduction Lord Jeffrey Mountevans said “Isam Al-Sager has led this flagship Arab financial institution since 2014, having risen through the ranks, after joining NBK in the late 1970s. He has worked in all areas of the bank, from credit to operations, international subsidiaries and Islamic banking. Under his leadership, NBK has embarked on an ambitious programme to develop digital banking for its customers. NBK was the first local bank to use blockchain technology for cross-border transfers”.

Meanwhile, Mr. George Kanaan, the CEO of the ABA said: "We are delighted to honor Mr. Isam Al-Sager for his long-standing efforts and contributions to the banking sector in the Arab World.  This is the culmination of a successful career spanning over several years of hard work within NBK Group, a leading and reputable financial institution”.

The Arab Bankers’ Association (ABA) was founded in 1980 and is a London-based not-for-profit professional organization whose members work in banks and related industries in the Arab world and in the United Kingdom.

ABA is dedicated to representing and promoting the interests of Arab banks and for those working alongside Arab financial institutions.

Al-Sager expressed his appreciation to NBK team for their hard work and dedication as they consistently strive to maintain NBK’s successful path and explore new and innovative ways to grow. Al-Sager also expressed his gratitude to the bank's customers across all geographical locations in which the bank operates for their confidence in NBK’s banking services and products.

Also he confirmed that he was quite fortunate to be part of NBK family over these years. This family is NBK’s most valuable resource and it is the men and women who dedicated their lives to make NBK one of the best banks in the Middle East region. Al-Sager also confirmed that everyone of this family contributed to the success of NBK. 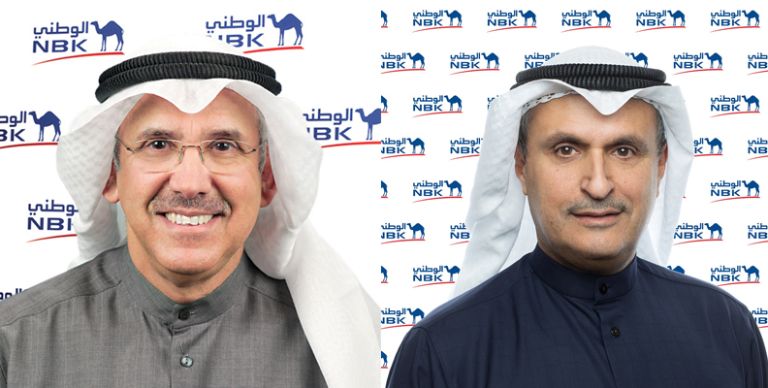 The proposed dividend is subject to shareholders’ approval at the Annual General Meeting. Earnings per share (EPS) stood at 60 fils, as compared to 55 fils in 2018, and equity attributable to shareholders increased by 8.8% to KD 3.21 billion (USD 10.6 billion).

Nasser Musaed Abdulla Al-Sayer, NBK Group Chairman, commented: “2019 was another strong year as we delivered healthy profitability while maintaining a robust balance sheet – demonstrating the quality and diversity of both our operations and earnings.

The Bank remains firmly committed to New Kuwait 2035 and is taking confident steps towards supporting its delivery. These financial results are driven by the execution of our strategy for growth and innovation, while contributing to the country’s socioeconomic development.

A highlight of the year was the heavy oversubscription of our USD 750 million perpetual tier-1 capital securities issuance, which was well-received by global fixed income investors and reflects solid investor confidence in NBK.”

Net operating income grew by 1.4% to KD 895.5 million (USD 3.0 billion), while non-interest income increased by 7.0% to KD 206.3 million (USD 680.7 million). Our international operations continued to play an important role in mitigating Group-level risk and diversifying income from across geographies. The total bottom line contribution of international operations accounted for 28% of the Group’s net profit in 2019.

Isam J. Al-Sager, NBK’s Group Chief Executive Officer, said: “Despite operating conditions remaining below expectations, with a volatile oil prices environment, NBK recorded another set of strong results, as the breadth of its operations and the scale of its international footprint mitigated risks and ensured consistent profitability.

Non-oil GDP growth in Kuwait is projected to reach 2.5% in 2020, and the pipeline of scheduled project awards is healthy. There is a broad expectation that the year will bring positive operating conditions, as the government continues to stimulate economic activity and the appetite for credit improves.

NBK is deeply committed to its digitalization strategy, in an effort to develop an established foothold in its regional markets. In 2019 we were proud to launch our in-house Digital Factory, which is playing a vital role in driving the progress of our digital roadmap. This will soon become a unique competitive advantage in the region.”

Al-Sager concluded: “NBK’s strategy for 2020 will not deviate from its current trajectory. The Group will continue to increase the diversity of its income across geographies and segments, with the primary objective of achieving superior returns and offering exceptional service to customers.”

In 2019, NBK was recognized by Global Finance and The Banker as the Best Bank in Kuwait, as well as ranking in the World’s 50 Safest Banks list by Global Finance for the 14th consecutive time. The awards are evidence of NBK’s strong financial position, market leadership and of its ability to meet the ever-changing needs of its customers.