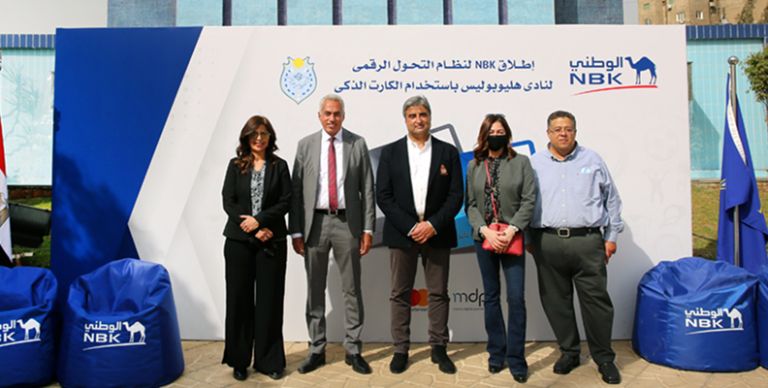 As part of the strategic partnership and close cooperation between National Bank of Kuwait - Egypt (NBK-Egypt) and Heliopolis Sporting Club (HSC), and to give effect to the cooperation protocol and the framework agreement signed between them for supporting and optimizing "Heliopolis Smart Digital Club", the bank launched a smart membership card for HSC members of both branches in Heliopolis and El Shorouk City.

The new card will enable members to benefit from many features and services inside and outside the club, as the HSC Membership Card has become a smart payment card, offering a unique experience locally, using cutting-edge technology to integrate more than one application in one card.

The launch of this card was announced in a ceremony held at HSC in Heliopolis Area on Thursday, 11th of March, which was attended by Mr. Amr El-Sonbaty - Chairman of the Board of Directors at HSC, and a group of board members and executives. From NBK – Egypt’ side, the ceremony was attended by Mr. Amr El Alfy, Head of Business Group at NBK – Egypt, and Mrs. Salma Abou Hussein, Head of Consumer Banking at NBK-Egypt, and a large number of the bank’s top and executive management team.

On this occasion, Mr. Yasser El-Tayeb, NBK - Egypt Vice Chairman, Managing Director & CEO said: “This cooperation between NBK - Egypt and HSC serves the bank’s strategy to support digital transformation projects, inside or outside the bank, which comes in line with the directions of the government and the Central Bank of Egypt for transforming into a society less dependent on cash and moving towards a digital economy, being one of the strategic objectives of sustainable development, in accordance with Egypt's Vision 2030, the path on which the bank has taken remarkable steps over the recent past years.”

On his part, Mr. Amr El Alfy, Head of Business Group at NBK – Egypt said: “The bank’s launch of this smart card for HSC members represents a new step in a series of cutting- edge digital products and services provided by the bank to its customers from all segments.

This stems from the belief in the key role of digital solutions and alternative channels in the banking sector, and the understanding of their importance to enhance the competitive edge over other banks, and to establish “the one bank concept” for customers, especially, as we strive to acquire a larger share of the Egyptian market in the coming period.”

El Alfy added that in addition to its financial support for this project, the bank participated in supervising its implementation using its expertise in the areas of electronic payment and smart cards, and being the bank of payments for the smart system of those cards, including the various banking transactions associated with it.

This was done by embedding a smart chip to the membership cards which enables HSC members not only access at the club’s new electronic gates and parking spaces, but will also double as a prepaid card to be recharged and used to make various purchases and payments.”

Commenting on launching the card, Mrs. Salma Abou Hussein, Head of Consumer Banking at NBK-Egypt said: “The launch of HSC Smart Card, in cooperation with our bank, is a milestone in the bank’s digital products and advanced payment solutions, which the bank has been keen to adopt since some time by launching “NBK - Egypt Online Banking”, then “NBK – Egypt Mobile Banking App”, allowing our customers to make a variety of banking transactions in a simple and secure way, without the need to visit the branch for every transaction. Additionally, the bank launched e-Wallet, which enables customers to make transfers and various bill payments directly from their mobile phones in an easy and secure way. As a culmination of the bank’s digital services, the bank recently launched “Meeza” Prepaid Card, which allows customers to enjoy a unique banking experience.”

Abou Hussein added that the new HSC Membership Card is a co-branded card that is used as a membership card, and, in addition, doubles as a prepaid card that can be used to make various purchases and bill payments inside or outside the club. It can also be used to pay for subscriptions to various sporting activities inside the club, as well as to make online payments, making it easier for members to use one card for all their daily transactions and needs. Members can activate the card and recharge it at the bank’s branch inside HSC, after filling in the documents and updating customer's information on Content Management System. The new card will be distributed to the members by HSC management as a replacement for the current plastic card.